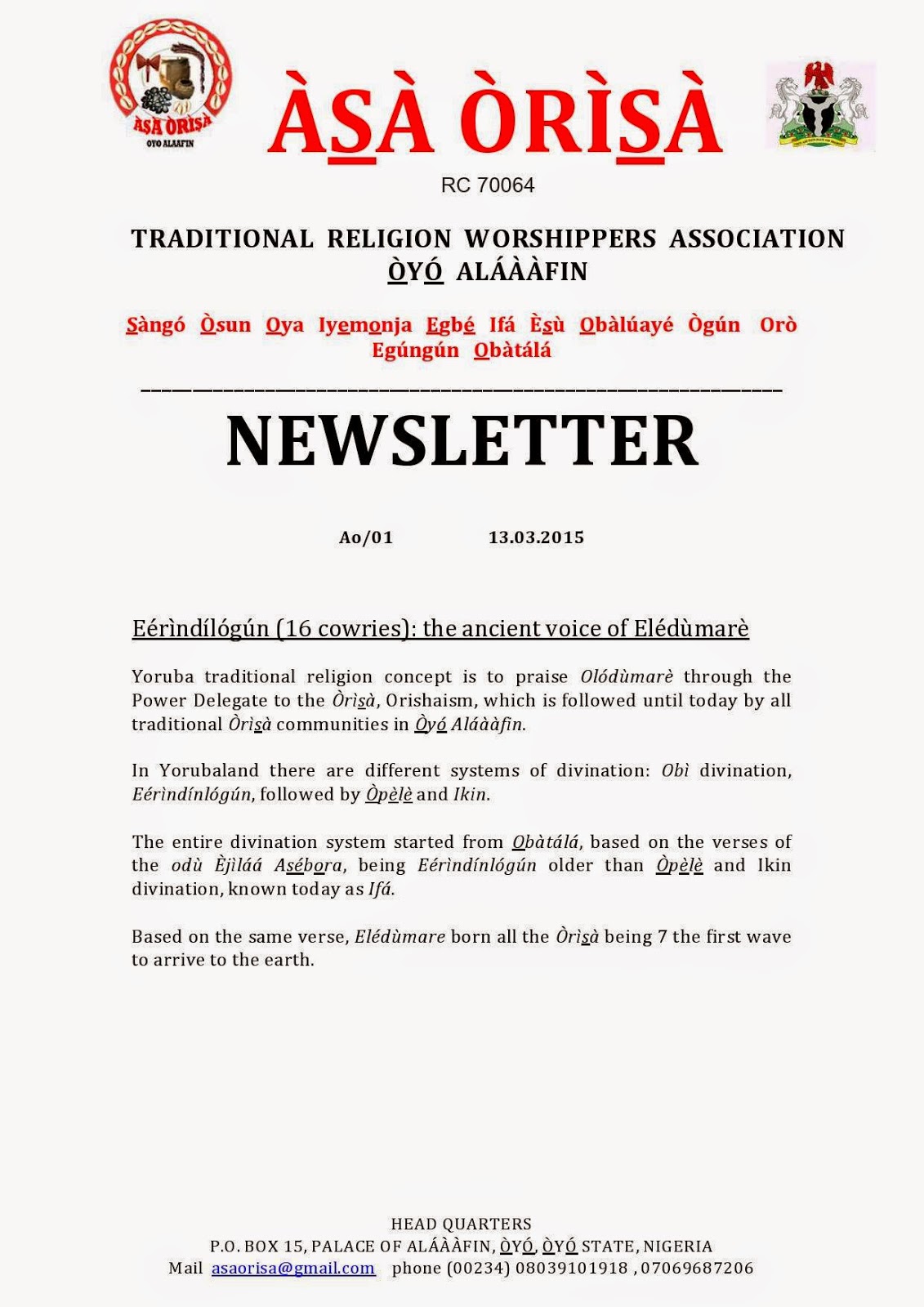 
THE ALAAFIN OF OYO

In terms of religion, he is a practising Muslim but describes himself as being liberal and a free mixer who was raised up in a strict Christian home and also went to a catholic school.


THE ALAAFIN OF OYO

In terms of religion, he is a practising Muslim but describes himself as being liberal and a free mixer who was raised up in a strict Christian home and also went to a catholic school.

THE ALAAFIN OF OYO

A well-learned man and a custodian of the Yoruba culture, he attended St Gregory’s College Lagos 1954-59 and remains one of the most influential monarchs in Nigeria. According to legend, the tribal marks on his face are exactly the type on the face of his father, Adeyemi II and his grandfather, Adeyemi I. Special care was taken in etching the tribal marks, as far as length, width, depth and symmetry are concerned. This special tribal mark is called Abaja Alaafin Mefa Mefa. Who says Nigerians are not rich in culture.

The change in his complexion over time is visible.

According to the official Alaafin of Oyo website, the following are the Royal Emblems of the Alaafin:

The Lion – symbolises the fearless nature of the Oyos.

The Tortoise (Ijapa) – the royal pet, symbolises longetivity and reselience

The Bata or Sango drum – is associated with Sango, the deified 3rd Alaafin of Oyo who is worshiped as the god of Thunder and Lightning

The equestrian figure (the warrior on horseback) – symbolises the military expansion of the Oyo Empire through the use of cavalry (horsemen) from the 14th to the 17th century.

2-According to him, the Old Oyo Empire existed without break for 600 years. That’s quite impressive, you know. Especially when you realize that many of the most popular empires, like the famed British Empire, did not last half of that.

3-He was born on 15th October, 1938, and that makes him 75 years old. He was selected among other contestants to become king in 1968 but the government of the day refused and he was not crowned until January 1971, he was working as an insurance clerk then.

4-Aláàfin means one who owns the palace, aáfin. It can also mean ‘Lord of the Palace’, as it is from the aafin that he lords his authority over his people. Make no mistake about it, the Alaafin is worshipped by his subjects. Tradition holds great sway over the people in Oyo Kingdom and you can check out the following pictures:

OBEISANCE: Many of the Alaafin’s subjects believe he is an embodiment of divine power and cosmic energy.

5- In times past, the Alaafin was an absolute ruler. Other names for the Aláàfin include Kábíyèsí (the One No One Can Question) Iku Baba Yeye (One Who Can Command Death or Pronounce It Upon His Father or Mother Or He Who Is Mother & Father To Death), Alashe (He Who Possesses Authority), Ekeji Orisha (Second-in-Command to the gods) NB: Translations can vary slightly.

The Queens of the Alaafin of Oyo.

Check out the inscription on his footstool.

6-Whoever enters the king’s courtyard must remove the shoes. Everyone except the Alaafin must have bare feet in his greeting courtyard.

HOLY GROUND: Off with the shoes!

Visitors inside his palace. Technology is changing everything. Even if Sango was to come back today, he’d be surprised.

7-The Kabiyesi’s eldest daughter is name Arewa, meaning ‘The Beautiful One’ in Yoruba.

The Igbakeji Orisha and his wives.

8-He contested with 10 other people for the position of the Alaafin. The contest started in 1968 and did not end until 1970. That’s around the time of the Nigerian Civil War. He was declared winner three times but the government initially rejected the ruling of the Oyomesi on all the three occasions. The Oyomesi advises the Alaafin and is the highest decision-making body in the kingdom.

Even on the streets, Africans prostrate for their paramount ruler. The Alaafin is approaching in a tracksuit with some kids.

9-He is a boxer, and was a champion in those days (he still has his punching bag in the courtyard) and his favourite meals are amala (yam flour), iyan (pounded yam), abula soup and ogi (pap).

10-In terms of religion, he is a practising Muslim but describes himself as being liberal and a free mixer who was raised up in a strict Christian home and also went to a Catholic school.

11-He has a pond in the palace where he keeps gold fish, and there is also a tortoise in the courtyard said to be hundreds of years old.

13-The Alaafin is said to communicate with the deities like Sango (the god of thunder) in their own language. I wonder how that is done. ‪#‎Mysterythingshey‬? Scientific minds will have a very hard time swallowing this…lol!

14-His own father, Adéníran Adéyemí II was the Alaafin for 10 years (1945-1955) until he was forced into exile by the political party of Chief Obáfémi Awólówò, the Action Group in 1956. While his father was on exile, he was sent to live with the Alake of Egbaland, Oba Oladapo Ademola, the father of the former Chief Justice of Nigeria, Adetokunbo Ademola.

15-He was the first Yoruba monarch to become the Chancellor of Uthman Dan Fodio University, Sokoto.

17-As at November 2013, news streamed in that 21 ancient rooms in the Palace were destroyed by fire caused by an electrical surge. Ile Alaafin to jo, ewa lo bu kun. The palace was also gutted by fire in 1990 during the Asipa crisis.

18-On his controversial relationship with the Ooni of Ife, Oba Okunade Sijuwade, Olubuse II, he says:

Let me put it this way: My relation with traditional rulers generally is cordial. But since you singled out the Ooni of Ife, you should have your reasons. I think he is in a better position to answer the question. For me, I have no problem with him at all as long as everybody knows his limit of authority.

19. At a point, the Alaafin delayed the appointment of a new Chief Imam for the kingdom because members of the Ajokidero family producing the new Imam were very bitterly opposed and critical of the Alaafin during the conflict between the Oro cult and Muslims in Oyo Town.

If Alaafins in the past transported via spirits, Oba Adeyemi III surely knows how to enjoy the comfort of a Toyota. Japanese products are good. I want to believe Emperor Akihito uses some too ‘cos Nigeria is yet to export tyres not to talk of automobiles.

20. He is a recipient of a national honour, the Commander of the Order of the Federal Republic (CFR). He installed the late Bashorun Moshood Kashimawo Olawale Abiola (MKO) as the last Aare Ona Kakanfo (Field Marshal or Generalissimo) of Yorubaland on 14th January, 1988 and also the talented singer, Queen Salawa Abeni whom he crowned the Queen of Waka Music (the Golden Voice of Africa) in 1992. Both truly deserve the honours (I’m actually listening to Salawa’s Cheer Up writing this…lol!)

He is the 43rd Alaafin of Oyo. Alaafins are buried at the Royal Burial Ground called the BARA. Oh! Before I forget, the Alaafin’s son, Fitila Adeyemi (aka Tillaman, see his picture below) is one of the hottest singing sensations in Nigeria. Actually, make I no lie, the dude has some of the baddest beatzzzz in the industry, if you are still doubting me, you just search for Tillaman on YouTube. I have warned you beforehand o!

Tillaman, the Alaafin’s son, Prince Adetona ‘Fitila’ Adeyemi is a musician and he is seen here performing in his music video titled Fori Fori. He returned from the UK after many years to make a mark in the Nigerian music industry. In August 2013, he was appointed the Youth Musical Ambassador by Governor Abiola Ajimobi of Oyo State. Tillaman! Iwo ni baba daddy won…lol!

THANKS FOR YOUR TIME.